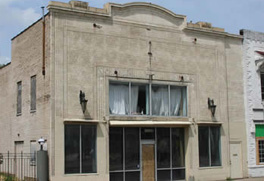 For the first time a building has been designated as historic because of its connection to the Anthology of American Folk Music. In 2006 music researcher Kurt Gegenhuber discovered that a Saint Paul, MN, theater had once been the Victoria Café, the venue whose 1927 house band recorded “Moonshine Dance Part One.”

When the Victoria was threatened in 2009, local residents asked Gegenhuber to seek historic status for the structure. The Saint Paul city council voted unanimously, and on April 13, 2011 the Victoria became a Historic Preservation Site.