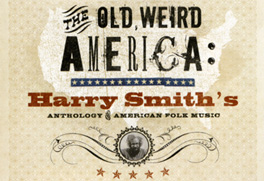 This new documentary by Rani Singh, director of the Harry Smith Archives and senior research associate in the Department of Contemporary Programs at the Getty Research Institute, tells the story of Smith’s most astonishing achievement, his 1952 Anthology of American Folk Music. An 84-track compilation of folk, country, Cajun, and blues music recorded between 1927 and 1932, the Anthology helped launch the folk music revival of the 1950s and 1960s and continues to inspire musicians and music lovers. Learn how Smith drew on his collection of over 8,000 vinyl recordings to craft this fascinating musical portrait of the “old, weird America,” which pulses with death, blood, betrayal, murder, intoxication, and every one of the seven deadly sins. See interviews, archival images, and performances by some of the most Smith-esque musicians of today, including Beck, Beth Orton, Sonic Youth, Lou Reed, Philip Glass, Emmylou Harris, Nick Cave, and Elvis Costello.