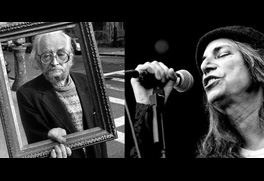 The Hammer Museum hosts Patti Smith for a night of film, live music and remembrances of Harry Smith. Filmmaker, musicologist, ethnographer, bohemian, and occultist, Harry Smith was one of the most original artists and unusual thinkers in postwar American culture. His Anthology of American Folk Music, a collection of early folk and blues, was a seminal text in the folk revival movement, and has gone on to inspire countless generations of musicians and roots music fans. While living at New York’s Chelsea Hotel during the 1970s, Smith was part of a milieu of underground artists, musicians, and writers, including Allen Ginsberg, Robert Mapplethorpe, Leonard Cohen and Janis Joplin. It was there that he also met the visionary poet and singer Patti Smith, who remained a close friend and colleague until Harry Smith’s passing in 1991. Join Patti Smith and friends for a night of film, live music, and remembrance to celebrate the publication of Harry Smith: The Avant-Garde in the American Vernacular.