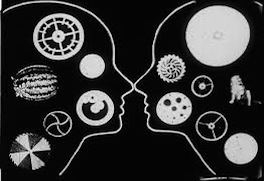 The Pompidou Center will be presenting Harry Smith’s Film #12: Heaven and Earth Magic (1950.61),  as part of the ongoing series for the show “Beat Generation.”

Film #12: Heaven and Earth Magic, appears to be an account of a hallucinatory trip to paradise and hell. Made from collages that alternate secular and religious iconography and magical symbolism, the film embodies a very particular alchemy of which Harry Smith was a skillful experimenter.

Film #12: Heaven and Earth Magic is undoubtedly the culmination of the visual and mystical research of the artist. Carried out throughout the 1950s, this film is the result of a long process of collecting (countless illustrations and 19th-century engravings were necessary) and organizing (in excess of a semblance of narrative logic, the script is the result of a system of “permutations” of infinite figures and motifs that Harry Smith wanted automatic). A first version of the film was about 4 hours long and was later reduced in to its current 66 minute length.

Harry Smith considered the screening of this film a performance. As part of the performance, he had imagined a slide projection system incorporating motifs in the film that redefined part of the projection on the screen (an egg-shaped mask, watermelon, dentist chair) and color filters that are superimposed on the movie in black and white. Harry Smith had also envisioned constructing cinema seats in various forms (eggs, watermelon) that, through a process of electronic sensors, would enable an interaction between the audience and the projection device.