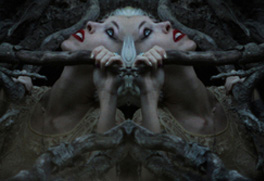 Artist, writer and filmmaker Brian Butler presents a program that explores the occult as depicted in avant-garde and experimental film. Magick has been defined by Aleister Crowley as “the science and art of causing change to occur inconformity with the will.” The short film is a perfect medium for modern occult ritual—utilizing sound light and color to alter the consciousness of the viewer. Thisprogram includes pioneers in the field of occult film as well as newer works by Brian Butler.