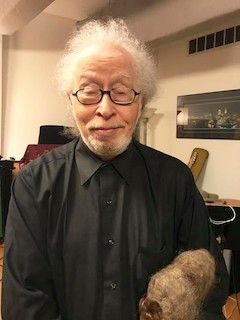 Longtime Harry Smith Archives board member Nicholas Amster Jay Fishelson  passed away at his home in Wooster, Ohio from heart disease. Musician and film aficionado Nick Amster first met Harry Smith when he ran away to New York City as a teenager in 1965. That meeting was the beginning of a long friendship that lasted until the end of Smith’s life when in 1991 Nick Amster accompanied Harry Smith to the stage of Grammy Award Ceremony where he received his Lifetime Achievement award. See it here. https://youtu.be/TgY9pAAXu1A

Nick’s support both financial and otherwise enabled several Harry Smith projects to come to fruition. The cloth cover on Smithsonian Folkways 1997 re-release of the Anthology of American Folk Music, the professional film, video and audio capture of the Harry Smith Project concerts and the documentary film The Old, Weird America all owe their existence in parts large and small to Nick’s careful attention to detail and appreciation for exquisite audio and visual presentation. Yours in Music. . . .

Nick Amster, notable supporter of music and arts in Cleveland, has died (Cleveland.com)