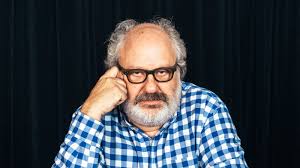 Acclaimed music producer Hal Willner has died due to complications from Covid19. Impossible to sum up his contributions, Willner was best known for his tribute albums featuring an eclectic array of musical styles and sounds including Amarcord Nino Rota (1981), Lost in the Stars: The Music of Kurt Weill (1985), Allen Ginsberg’s Holy Soul Jelly Roll : Poems and Songs 1949 – 1993, and others. Willner was music coordinator on Saturday Night Live since 1980.

Master ringleader of the Harry Smith Project concerts held in London (1999) New York (2000) and Los Angeles (2001) which culminated in Shout! Factory’s four CD/DVD Harry Smith Project (2006).  The concerts, some running over five hours, featured an all-star line-up of musicians radically interpreting Smith’s music and film output. Willner’s offbeat humor, openness and cutting=edge sensibility functioned more like a magician or chemist; he brought people together and created something edgy, out there and new. Board member of the Harry Smith Archives since 2014, his visionary insight on all matters will be sorely missed.