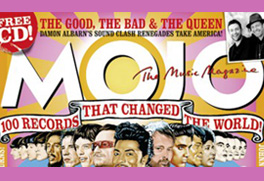 Music magazine Mojo includes the Anthology in the top 10 of its list “100 Records that Changed the World.” The entire list is as follows:

1. Tutti Frutti by Little Richard
2. I Want To Hold Your Hand by The Beatles
3. Heartbreak Hotel by Elvis Presley
4. The Freewheelin’ Bob Dylan by Bob Dylan
5. Autobahn by Kraftwerk
6. King of The Delta Blues Singers by Robert Johnson
7. The Velvet Underground by The Velvet Underground + Nico
8. Anthology of American Folk Music
9. What’d I Say by Ray Charles
10. God Save The Queen by Sex Pistols