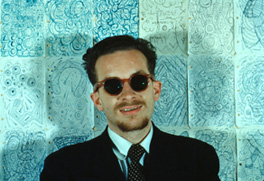 Miami Rail is an editorially independent expansion of the Brooklyn Rail providing coverage of arts and culture. In Winter 2015 artist and museum professional Kevin Arrow published an article on Smith including an interview with longtime friendand colleague Jonas Mekas.

Stories surrounding Harry Smith (1923–1991) are the stuff of legend. He was a painter, filmmaker, anthropologist, ethno-musicologist, archivist, and alchemist ordained in the Ordo Templi Orientis founded by occult “magus” Aleister Crowley. He was also a slight, disheveled, cantankerous genius with poor eyesight and a lifelong relationship with alcohol, marijuana, speed, esoteric books, and filmmaking.

He was known to spend years working on a single labor-intensive film only to unspool it down Second Avenue in New York’s Lower East Side in an alcohol-fueled temper tantrum. Artworks and collections have been given away or lost as he was evicted from the various hotel apartments he inhabited during the decades he lived in New York. He survived by selling, trading, and bartering his artwork for food and rent.

Toward the end of his life, Smith was the “Shaman-in-Residence” at the Jack Kerouac School of Disembodied Poetics at the Naropa Institute in Boulder, Colorado, founded by Tibetan meditation master and teacher Chögyam Trungpa Rinpoche. At the Naropa Institute, Smith taught classes on alchemy, Native American cosmologies, and the rationality of namelessness, and was supported by a grant provided to him by the Grateful Dead organization.

I first encountered the name Harry Smith in the late 1980s in obscure music and enthused culture zines like Chemical Imbalance and Forced Exposure. These were two important outlets for learning about music, literature, visual art, and film inthe pre-Internet era and Smith was always written about with a sense of awe andreverence.”