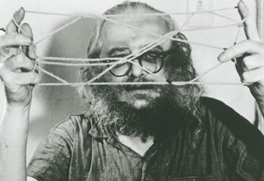 Cabinet presents an exhibition of 22 string figures created by ethnomusicologist, collector and artist Harry Smith. The exhibition is draw from the collection of John Cohen and organized by the painter Terry Winter.

Though perhaps best known to the general public for his groundbreaking research into early twentieth-century American folk music—and the seminal six-album compilation he produced for the Smithsonian Institution in 1952—Smith was also active as an artist and filmmaker in both San Francisco and New York, where he lived from the early 1950s until his death.

A widely curious polymath, Smith was an avid collector of artifacts ranging from Seminole textiles to Ukrainian Easter eggs; he also amassed the world’s largest known collection of paper airplanes, which he later donated to the Smithsonian Institution’s National Air and Space Museum. He also was an avid student of string figures. First described in Western anthropological literature by Franz Boas in 1888, these patterns—made by looping or weaving lengths of string into geometric forms or shapes that often evoke familiar objects—have been produced throughout history, both as a secular pastime and as a spiritual practice. When he died, Smith left an unfinished thousand-page manuscript on string figures, along with an extensive collection of figures that he had created.

Cabinet’s exhibition brings together a selection of these artifacts, along with a facsimile of portions of Smith’s unpublished manuscript and an accompanying video program.

Also on view will be a limited edition print by Terry Winters published on the occasion of the exhibition. Proceeds from sales of the edition will support Cabinet’s activities.

Read more about the exhibition here.