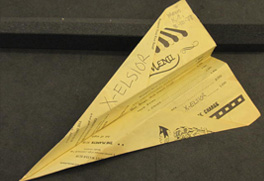 The Reg Vardy Gallery proudly presents the first European exhibition devoted to Harry Smith’s films and hobbies. The exhibition’s press release states: “This exhibition includes a variety of Smith’s eccentric ethnographic collections, or what he called ‘Encyclopaedias of Design’ such as string figures, Pysanky (Ukrainian Easter eggs), early sound recordings, and a range of his hand-painted, stop-motion and collaged animations such as Early Abstractions, and Late Superimpositions. The exhibition will also include documentation of Smith’s paper airplane collection. This unusual and rare collection is comprised of hundreds of paper airplanes found by Smith on the streets of New York City from the late 1960s to the early 1980s. This exhibition of the hobbies and artistry of Harry Smith has been organised in collaboration with the Harry Smith Archives and Anthology Film Archives, New York.”