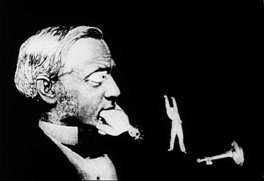 Smith summarized the film by stating: “The first part depicts the heroine’s toothache consequent to the loss of a very valuable watermelon, her dentistry and transportation to heaven. Next follows an elaborate exposition of the heavenly land, in terms of Israel and Montreal. The second part depicts the return to Earth from being eaten by Max Müller on the day Edward VII dedicated the Great Sewer of London.”