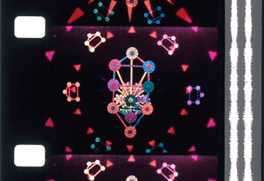 The Library of Congress adds Harry Smith’s landmark film Early Abstractions #1-5, 7, 10 (1939-56)to the National Film Registry. The press release states: “Harry Smith made his mark in many fields. He was a painter, archivist and compiler of the landmark “Anthology of American Music” (which helped stimulate a folk and blues revival). Smith also was a groundbreaking avant-garde filmmaker whose revolutionary animation challenged traditional concepts of cinema. His films used batik, collage and optical printing to create a tumult of shapes and images that integrates chaos with control. Consisting of seven films made over a 17-year span, “Early Abstractions” is a lovely, ever-moving collage of abstraction, color and imagery.