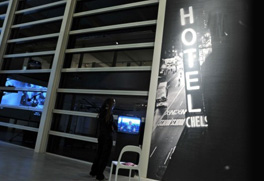 The DOX Center for Contemporary Art presents an exhibition chronicling the history of the Chelsea Hotel. The exhibition doesn’t aspire to present a comprehensive history of the Chelsea Hotel and its bohemia. Instead, it focuses on three seminal artists associated with that legendary place – Harry Smith, Andy Warhol and Robert Mapplethorpe – to explore the changing notions of bohemia from the ’50s to the ’80s. The work and lives of Harry Smith, Andy Warhol and Robert Mapplethorpe represent multiple chapters in the story of America’s bohemia. They all struggled with modern contradictions between material progress and spiritual pursuits or between the artist’s critical attitude to society and his dependency on it. Their work and lives also expose a changing attitude to success. By comparing Smith, Warhol, Mapplethorpe and also other two artists, Jonas Mekas and Michel Auder, a complex picture emerges, revealing not only differing notions of bohemia’s “otherness” and various attempts to address the above contradictions, but also describing bohemia’s trajectory in the second half of the 20th century. The exhibition highlights the crucial role of bohemia in modern culture and ask what is its meaning today when we may be witnessing the demise of bohemianism? Or its fundamental transformation?