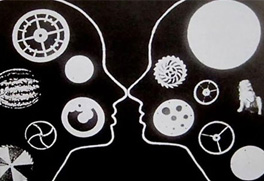 Both a heady milestone in low-budget folk animation and a glimpse into the clip-art mindscape of one of America’s most legendary culture hounds, Harry Smith’s Heaven and Earth Magic is an unforgettable animated experience of watermelons, dentistry, and heavenly ascension. Smith’s black-and-white opus of a collage film elevates 19th-century graphic imagery with both a loony dream-logic disregard for laws of physics (Terry Gilliam fans, take note) and a poetic sense of metaphor.