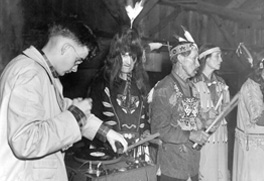 It was quite a load to carry from the car to the Lummi Nation smokehouse on Gooseberry Point, even for teen-age Bill Holm in the early 1940s. And he had taken the bus up from Seattle for this?

Most of the stuff belonged to his friend Harry Smith, who was a year and a half older and only a bike ride away from his parents’ house in Fairhaven. Harry was in good with the tribe: He’d walk in, say hi and photograph or record the American Indians’ songs and dances.

It was Holm’s job to brush the shavings off the plastic discs after the recording device literally cut grooves of sound into them. Harry took care of the rest. “Harry knew these people very well, and they must’ve trusted him a lot,” Holm says. “And when he made the recordings and took the photographs, he always asked their permission.”

After Holm joined the Army in the mid-1940s, the two lost track of each other. Holm went on to become an educator, a painter, an honorary American Indian and one of the foremost Northwest tribal ethnologists. Harry? He amassed the world’s largest private collection of paper airplanes, which he donated to the Smithsonian Institution.

Holm went on to become an educator, a painter, an honorary American Indian and one of the foremost Northwest tribal ethnologists.

Harry? He amassed the world’s largest private collection of paper airplanes, which he donated to the Smithsonian Institution.

He patented a manner of hand-painting individual frames of film that made him an icon in experimental filmmaking.

Above all, Harry kept on recording music and collecting music recordings. In 1952, the well-annotated library of 78 rpm records he started in the early ’40s in Bellingham and other Northwest cities was released by Folkways Records as the “Anthology of American Folk Music.” Its recordings of well-worn tales once-forgotten Appalachian porch songs not only influenced Bob Dylan, Ry Cooder andothers but also laid the blueprint for the ’60s folk revival and more.

Harry died 10 years ago this past Tuesday, and since then, he has been immortalized in three books, has been the subject of a symposium at the Getty Research Institute and has had the three-volume folk anthology and its previously unreleased fourth volume released on CD.
Not bad for a kid from Bellingham.

“I guess my claim to fame,” says Holm, curator emeritus at the Burke Museum in Seattle, “is that I knew teen-age Harry Smith.”

Gordon Tweit knew Harry Smith as the quiet kid down the street who rode his bike everywhere.

“He didn’t really mix with all of us,” says Tweit, former owner of Fairhaven Pharmacy and a Bellingham High School junior in 1943, when Harry was a senior. “He was just so busy doing everything — riding out to Lummi, getting information on their language and so forth.”

Born in Portland, Ore., in 1923, Harry moved with his parents, Robert James and Mary Louise Smith, to 1515 J St. before he was 2 years old. Shortly after, they moved to 1104 13th St., only blocks from Pacific American Fisheries, where Robert J. Smith was a marine engineer, says Darrin Daniel, author of “Harry Smith: Fragments of a Northwest Life.” Mary Smith taught on the Lummi Reservation.

Around 1937, the family moved to Anacortes. There, Harry claimed his parents lived in separate houses. He also claimed his father gave him a blacksmith shop in 1935 and told him to turn iron to gold. And that his real father was Aleister Crowley, noted occultist and self-proclaimed “wickedest man alive.”

“Harry was a storyteller, for one thing, so I don’t know how much of that is true,” Holm says. “I stayed at his home a couple of nights and met his parents. I’ve heard stories about their interest in the occult. That may be true, but it never came upwhen they were there.”

Holm got to know Harry just before the Smiths moved back to Bellingham around 1942. They met as part of a group of American Indian enthusiasts touring the Swinomish Indian Reservation through the Washington State Museum.

They soon started expeditions of their own. Often, Harry would take trips of his own from his parents’ home at the foot of Harris Avenue — now occupied by Arrowac Fisheries — to grasp as much of the tribal culture as he could.

“At the time, he was like 17, 18 years old, and he was doing university-level research and graphic recording way ahead of other people his age,” Holm says. “No formal training — he learned it all on his own.”

In 1943, a photograph of Harry recording a Lummi spirit dance appeared in American Magazine with the caption:
“GRAY-BEARDED PROFESSORS regard this teenage anthropologist with respect. He’s Harry Smith, who at 15 began making expeditions by bicycle from his home in South Bellingham, Wash., to the primitive Indian tribes of Washington and British Columbia … Harry has found Indians friendly except when drunk, or suspicious that he’s a German spy.”

Most recordings from this period have vanished, save a four-disc acetate set at the University of Washington Ethnomusicology Archives.
Harry left town in 1943 to attend UW, but not before appearing in the 1943 Shuksan, Bellingham High School’s yearbook, as part of the art club, yearbook staff and “You Can’t Take it With You” cast.

“A real interesting character, I’ll tell you that,” Tweit says.

July 4, Boulder, Colo.: A mysterious bearded and bespectacled figure sat at a table in a tent. From the looks of his headphones and microphone placement, he appeared to be recording the table itself. So Rani Singh set down her Coke can. Hard. The figure, nearly deafened, looked up.

“It was the start of a long beautiful relationship,” says Rani Singh, executor of the Harry Smith Archives, of her first Harry Smith encounter, some time in the late ’80s.

Smith was an ardent sound collector — the 358 audio cassettes he left behind when he died are ample proof. He began in earnest in the ’40s as a Bellingham resident.

With World War II raging and imported material scarce, records were in demand–not for their music, but for their shellac.

“So a lot of these records, from 78s and so forth, were called in, melted, and then the defense company used them for other things,” Tweit says.

That meant patriotic folks started digging their record collections out of the closet and putting them up for sale in droves.

In Bellingham, recorded discs started popping up at the Salvation Army, then located near the current Whatcom Museum of History & Art, and other thrift stores in Old Town and near Railroad Avenue, Tweit says.

Harry snatched them up.

According to the 1996 book “American Magus,” edited by Paola Igliori, Harry asked Folkways Records’ Moses Asch in 1947 to release an anthology of a number of rare records in his collection. In 1952, the 84-song “Anthology of American Folk Music” hit the streets. It took 10 years, but it hit hard.

“In 1952, Harry and these songs really didn’t have the same impact as they had later on in the early ’60s,” says Robert Santelli, Experience Music Project CEO and an organizer of PBS’ “American Roots Music” series. “It’s music that re-relates.”

Dylan adapted the anthology’s “Down on Penny’s Farm” for his “Maggie’s Farm.” And the folk revival of the ’60s gained steam with the “discovery” of characters in the anthology’s songs — John Henry, Stagger Lee, Casey Jones — and the musicians behind them — Mississippi John Hurt, Dock Boggs and more blind, disabled and darn-hard-luck banjo players than anyone thought imaginable.

“Simplicity was part of it,” says Bob Shane of the Kingston Trio, another folk group that gained popularity at the time. “You like a good melody, you like a good lyric. It was all there.”

After the anthology, Harry spent time working in California, New York, Oklahoma and Colorado, where he met Singh, who was his assistant from 1988 until his death. Singh recalled a few times when Harry said it would be 50 years until his art truly was appreciated. Next year, the anthology turns the big 5-0.

“Maybe that’s it,” Singh says. “Time to reassess that.”

For the past five years or so, Bellingham’s Peadar MacMahan played a version of the song “John Henry” with the Elvi’s and other bands. But only in the past six months has he learned of its connection to the folk anthology — and to Harry Smith.

“The fact that he lived in Bellingham? That he recorded the Lummis? Such an interesting character,” says MacMahan, who recorded a version of “John Henry” with the Elvi’s for a new local-band compilation on Outright Records.

It wouldn’t be the first time: Local bluegrass outfit Colorado Luke and the Scrimshaw Boys recorded a version of “Coo Coo Bird,” sung by Clarence Ashley on the anthology, for a CD released earlier this year. And Estrus Records’ Soledad Brothers interpolated Blind Willie Johnson’s “John the Revelator” from the anthology on their self-titled CD in 2000.

Musicians such as the Byrds’ Roger McGuinn, the Fugs’ Peter Stampfel and Wilco’s Jeff Tweedy participated in a project similar to MacMahan’s in 1997.

Their versions of the anthology’s songs are commemorated on a CD, “The Harry Smith Connection.”

Last week, Bob Neuwirth, the Holy Modal Rounders’ John Cohen and othersgathered in New York for yet another Harry Smith tribute, this time to commemorate his death.

“Old friends, new people, young kids — it was a great turnout,” Singh says. “It’s wonderful to see how his work is interpreted now.” ]

Singh and Santelli say the EMP even is planning a Harry Smith exhibit, perhaps focusing on his Northwest roots.

“He’s one of those people who’s gonna be far bigger in death than in birth, slowly but surely,” Santelli says.

And the few who knew him in Bellingham could attest to that.

“Most of the people I know in my circle, if you want to call it that, don’t know who Harry Smith was,” Bill Holm says. “But once in a while it comes up, and someone says, ‘You mean the Harry Smith? You knew the Harry Smith?’